Tesla firmware 8.0 has been out for a couple weeks now and it seems that my review of the 8.0 Media Player was overly kind based on comments on the post and posts by other well-known bloggers such as TeslaOwner.

I wanted to hold off on a review of the navigation system until I had several trips under my belt and now with several hundred miles logged using navigation I’ll offer up my opinion.

The summary is that, while not quite as bad as the broken new Media Player, there are some glaring bugs in the basic functionality of 8.0 Navigation that get in the way of otherwise great improvements. Read on for details.

While controversial, the expanded map view (thanks to the auto-hiding menu bar) is a welcome addition maximizing the use of the beautiful 17″ screen. 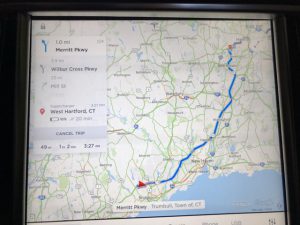 Some owners have complained that it requires an extra press to get to other 17″ functions (charts, browser, phone app, etc) now, but for my daily use, I rarely change the two panels shown on my 17″ screen (Navigation and Media).

Another thing I really like is that Tesla preserved the current location information (street, city, state) while hiding the menu bar. It would have been a big loss if they had taken the easy path and removed it with the rest.

Another controversial change is Tesla’s decision to pin the Navigation screen to the top of the 17″ display by default. In the past, picking a new app put it on top by default, but now if Navigation is being shown, then picking another app will place it below the Navigation window. Some people, like myself, appreciate this new behavior, but others are frustrated and would like the old behavior back. A simple option in the user preferences would solve this but I also appreciate the challenge with adding too many options to a user interface.

Tesla has 4 view modes for the map:

The icon to select them can be a bit hard to see now (it’s located at the top right of the image above) and repeatedly tapping it toggles through those options.

A small improvement involves the dashboard navigation display. Tesla now makes it obvious which side of the road your destination is on when you reach it so you no longer have to look to the 17″ for that information.

A welcome addition is a shortcut to help you find the closest chargers to your current location. While similar to the functionality provided by EVTripping’s Chargers page, although in a more graphical form, it still lacks the ability to bring up charger amenities and details with a quick tap. 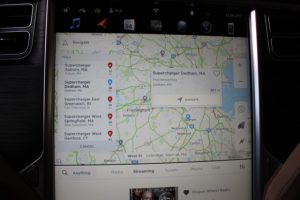 Full disclosure: I’m the creator of EVtripping.com, but would love to see Tesla make sections of EVTripping irrelevant with in-car updates and improvements.

When you plan a long trip involving Superchargers, Tesla provides a comprehensive trip overview showing all the stops and charge times. 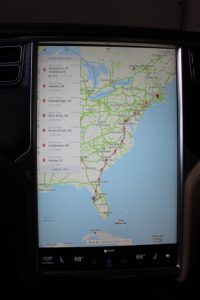 This is a great overview of your trip and required charges and was available in prior versions too. What is different in this version is that after you start driving there doesn’t appear to be a way to get back to this wonderful trip overview. That’s a loss they should fix.

The new handling of reporting the round trip remaining charge still has me confused. I was trained to tap the bottom of the directions and quickly get my round trip range. Now I find myself awkwardly scrolling to the bottom of a list while driving to find it. And that’s if I’ve turned it on. Any list scrolling while driving should be eliminated, it is a major distraction. 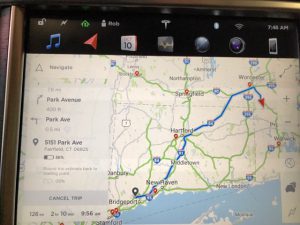 Generally, the Navigation system seems much slower to update directions now. Recently, in Boston, I literally had to stop overly long at a light after a wrong turn just to wait for the map to update. Having done similar drives before, I believe performance has degraded in this area and causes the basic Navigation functionality to be less useful.

The worst, and most glaring issue involves tunnels and the dashboard navigation system. The system gets totally confused by tunnels and shows you in a tunnel when you’re not, or not in one when you are. It has been so bad that at times I’ve had to reboot the dashboard display which has been a first for me in over 2.5 years/70,000 miles of experience. 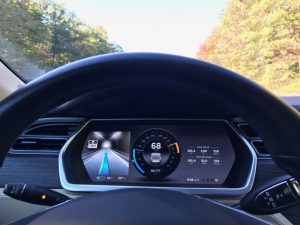 Rebooting the dashboard display is much more concerning than rebooting the 17″, especially when approaching a turn that you know you need to make soon and while driving in traffic.

Like the media player updates, I believe the improvements are a good step forward in many areas in terms of the user experience. The issues that I’ve run into need to be addressed in an upcoming patch release or the 8.1 release.

The elephant in the room on Navigation are all the basic deficiencies that are missing in Tesla’s Navigation system, but present in other cars for almost a decade. Waypoints, alternative routes, route preferences, etc. Even some small usability issues, like the random sorting of favorites in the Navigation system, have not yet been addressed and would require very little time to fix.

While I appreciate the improved looks and the few improvements added in the 8.0 Navigation system, as an owner I’m wondering if Tesla is listening to the owners and what they really need for basic everyday driving and Navigation versus spending time on the kinds of things you see above. Those masses coming to the Model 3 from the Audis, BMWs, Acuras etc are not going to be as forgiving as us early adopters with missing basic functionality.

And, no, a special 105 degrees Fahrenheit limit is not a great new safety feature for pets or kids. Please don’t cook them. More on that next time.