Tesla recently revealed that they actually started shipping 75kWh batteries in the Tesla Model S 70 and let owners know that they could unlock the extra 5kWh for a price. This isn’t the first time Tesla has done something like this and, while controversial, I believe its a great trend for Tesla and hopefully the industry.

the 70kWh to 75kWh Unlockable upgrade 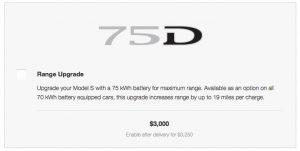 There have been some debates online about whether or not it makes sense to do the upgrade.

Some argue that they can “use” the bigger battery to offset long term battery degradation and enjoy the benefit at no extra cost. While its probably true that the larger battery will degrade even less, Tesla’s battery degradation over time is very slight. At over 60,000 miles i’ve only lost 5% of battery range or about 13 miles of rated range and those lost 13 miles don’t make a difference to anything I do. So while you could benefit a bit from the larger battery for free and having a bigger one on the car has no real downside, the effect on degradation is immaterial and its in the small percentage of a small percentage range.

Tesla has priced this upgrade after delivery at $3,250 US (if you order the larger battery with the car the price is $3,000 to account for the extra costs involved in a secondary transaction). So they’ve set the battery price at $650/kWh.

Battery upgrades are currently priced at $650/kWh or $171/rated mile.

The base Model 70D has a range of 240 miles. The Model 75D has a range of 259 miles so you gain 19 miles or about 8% extra range from this upgrade. Another way of looking at the price is that it costs $171/mile of range. Here again i’d make the argument that for most those extra 19 miles won’t make much of a difference for most owners. There will be a rare few owners that the extra 19 miles makes or breaks a particular trip or pattern they drive, and for most the upgrade won’t make sense. Note that the 70D and 75D both Supercharge slower than the 85D and 90D cars — if you also got a boost in charging speed from the upgrade perhaps it would be more valuable.

So, why am I a fan of Tesla offering software unlock-able features like this? The reason is that it allows Tesla to simplify their manufacturing build process and roll out newer/better functionality over time while not giving away more capability than was paid for and while still maintaining an upside in a secondary transaction.

In the past, every time Tesla introduced a newer battery and people either had to pay more than they had originally planned due to the new battery or got one that was now not the latest and greatest Tesla offered there were complaints. Tesla has neatly solved the problem — if you ordered a 70D, you get a 70D, but if you want a 75D they can upgrade you for a price.

Some argue that they bought a car and Tesla isn’t letting them use all of the hardware in it and are angry about that. But the reality is they purchased a 70D and Tesla gave them a 75D and just restricted its abilities. They really have no right to be upset.

I believe the transition from 70D to 75D was was nicely done and continues to lay the groundwork for Tesla to add new hardware capabilities over time and phase out offerings as they see fit. 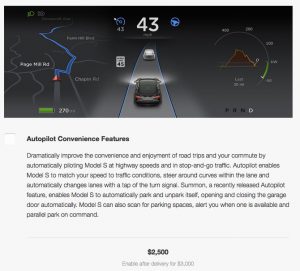 Before the 75D battery upgrade (but unfortunately after my car was built) Tesla started including Autopilot hardware on all Model S’s (and now X’s) built. This started before the Autopilot feature was available in the software.

Today you can buy a Tesla with or without autopilot functionality (the feature is $2,500 when you buy the car, but $3,000 if bought after you take delivery), but all cars (from about September 2014 onwards) have the hardware to do Autopilot.

Tesla recently offered a free 30 day trial of Autopilot to owners that had Autopilot capable cars but had not yet purchased the feature to encourage them to try it and upgrade. 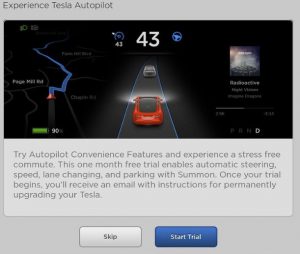 Here again Tesla is fronting the costs of Autopilot hardware for all Teslas and making the bet that most will pay for the feature and running promotions to encourage people to do the upgrade.

In the early days Supercharging wasn’t enabled on all Tesla’s — it was an add-on option. Owners with Supercharging hardware that didn’t pay for the Supercharging capability (and it wasn’t included on their model) can still go to Tesla’s online store and order the upgrade today. These are mostly older Tesla Model S 60 models. 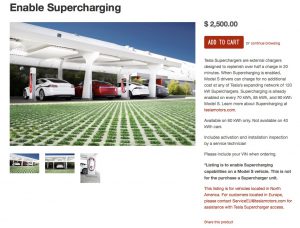 Tesla originally targeted a $50,000 base price for the Model S

Years ago Tesla also offered a 40kWh battery version of the Model S to help Tesla make good on a planned starting price of $50,000 (those days are long gone!). With “only” 160 miles of rated range, the 40kWh version wasn’t very popular. To improve manufacturing efficiencies, Tesla built only 60kWh models and software limited those that purchased the 40kWh model to 40kWh. Back at that time the price for that upgrade was about $11,000 putting the price per kWh at $550/kWh which is actually lower than what they’re currently charging for similar upgrades.

Tesla is charging $100/kWh more now on battery upgrades than they did in the past — I thought their costs were improving? Evidently so are their margins.

I’m a big fan of a small company reducing the number of permutations its manufacturing line has to deal with. I also like the idea of encouraging secondary transactions and allowing people to “buy more car” or upgrade their cars after they take delivery. I think the whole approach gives Tesla a lot of flexibility and allows people to delay the expense of some features they can live without until a time they decide they need them or can afford them.

I wonder why some features like Premium Sound and XM radio haven’t gone the same route as I have to imagine the incremental costs of the hardware for those options are a lot smaller than those for autopilot or Supercharging.

I do belive, however, that the after-delivery pricing of some of these options may come down over time. Tesla has sunk costs in the hardware. If the owners don’t upgrade in year 1, why shouldn’t Tesla lower the price in year 2? Tesla stands to make no money back on their investment in the individual cars if they can’t get people to upgrade, so why not lower prices over time? While it could seem like they’re devaluing the feature, there is a strong motivation for the owner pay sooner rather than later to get more years of enjoyment and use of the feature. Just as the car’s value declines over time, so should that of the features in it.

Software upgradeable features may get cheaper over time.

What do you think of software unlock-able hardware? Let me know in the comments below.