I wrote previously about the trip energy prediction addition to the 6.1 release which is one of the bigger additions for older Model S owners in the 6.1 release. There are some other large additions in 6.1 for people that have Model S’s with the autopilot hardware that I don’t have but there are also a slew of smaller additions that everyone gets that I wanted to cover. There are several of them so here i’ll cover items related to range, routing and parking and then will cover some of the others in my next post. 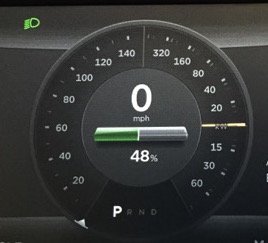 The rated and ideal range metrics for the Model S are a continually hot topic amongst owners everywhere. While both are theoretically reachable, most of the time owners don’t achieve either in the real world.

I’m collecting a bunch of data right now for a data-oriented post in the future but as an example, the 265 mile rated range of the Model S 86kW model is more like 160 miles of actual range here in the New England in the winter. The reality is that range displays in miles are not going to be accurate no matter how you do them. Even using a moving average over your last few miles things could dramatically change if the weather changes, you start climbing a mountain, etc.

With the 6.1 update Tesla now lets you replace the range display in miles with a percentage number for amount of battery capacity left. This is redundant with the horizontal battery gage but is a lot less misleading than the miles-based displays and the additional accuracy of an actual number is helpful. This option also lines up nicely with the trip energy prediction additions in the 6.1 update.

It takes some time to get used to using this new way of measuring your range but after a week i’ve gotten used to it and like it better than the other displays. Something about them being off by 40-50% in the winter killed their value for me.

Another small, but very welcome, enhancement is that the Trip app now defaults to average versus instant range and preserves whatever setting you’ve selected for the dash display when you bring it up. This was a no brainer that owners have been asking for for a while.

In the 6.1 release Tesla has offered a “Route Overview” option (tap the same control a third time). This new view shows your entire route in a north up view and automatically zooms in as close in on your destination.

I’ve been using the new view quite a bit over the last week but it mostly seems like a solution looking for a problem. I’m not sure what motivated Tesla to add this feature but it works as described and adds some variety.

I’m lumping these two together although only those with the parking assistance package will benefit from the improvements to park assist. Now when reversing the Model S shows both front and rear parking sensor indications for ease of parallel parking, backing into tight spots, etc. You can also manually trigger the park assist view below 5mph. This was a great addition and its very helpful to know where all the corners of your car are as you pull in and out of spaces.

All Model S owners benefit from the addition of rear camera guidelines. For a long time there were rumors that the graphics engine Tesla used was not capable of doing this feat but somehow the rocket scientists at Tesla have figured it out.

I never had rear camera guidelines on any of my previous cars so this feature wasn’t on my wish list and I never really understood why so many people wanted them. Now that I have them I can see how it would be hard to ever go back to a car without them.

Rear camera guidelines was the #1 requested feature for years and Tesla has delivered!

In a nutshell when reversing the Model S puts guidelines on the camera view to indicate the path your car will travel. These lines move with your steering wheel and i’ve seen different colors (blue, grey, white) on different backgrounds to make them show up well. Teslarati has a video of them in action if you want to see more before you get the update.

Telsa has made some really solid improvements around range, routing displays and parking assistance. Combine these with the trip energy prediction mentioned previously and you have a very solid 6.1 release.

But we’re not done yet. They’ve made great improvements in the media and entertainment areas too which we’ll cover soon.