While I don’t often drive with them open, I’ve always been a big fan of sunroofs in cars. Sunroofs seem to open up the cabin space and make things feel less enclosed. For me getting the Panoramic sunroof option was a no-brainer when I ordered my Model S but for others the choice is not that automatic.

The Panoramic sunroof is a $2,500 option on the Model S and for me represented about 2.5% of my total cost. Tesla claims it blocks 98% of ultraviolet light and 81% of  solar heat. I don’t know if those numbers are correct, but I can tell you that this is not your normal sunroof.

This is not your normal sunroof.

I love sunroofs, but my wife hates them. It’s always a discussion point when i’m buying a car. If it’s for me I get the sunroof,  if it’s for her we try not to. If she gets a car with a sunroof for some reason (“loaded” ones that have everything on them) then she pulls the shade over it and pretends it doesn’t exist. She dislikes the glare of the sun on her and the feeling of openness. I expected the usual complaints on the sunroof for the Model S and doubly so because the Model S does not include a shade for the sunroof which is unusual in my experience. Surprisingly she has never complained about the sunroof.

There is no shade for the sunroof

While the specs above about UV and light blocked sound cool, the reality is that the sunroof is so dark and so good at blocking light that it both meets my needs (more room, some outside light, openness) while meeting her needs too in not feeling too open or too glaring. This is the first car i’ve owned where we’re both happy with the sunroof.

This is the first car i’ve owned where we’re both happy with the sunroof. 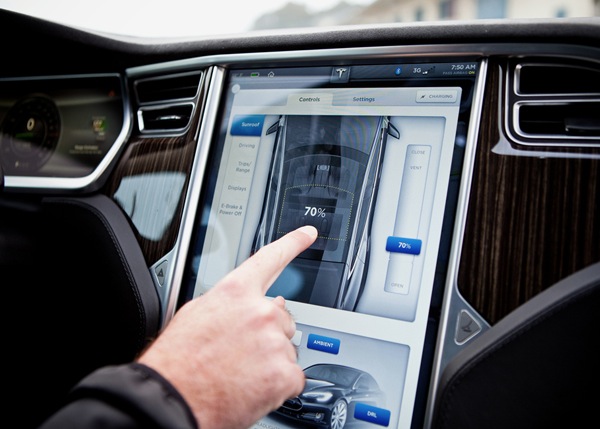 I had a loaner a while back and I wrote about the active suspension feature and to me it is mostly a gimmick with some cool show-off value. The sunroof is a great feature and has cool show-off value. There’s a separate section of your Model S controls dedicated to the sunroof if you have it. From there you can open the sunroof by dragging on the roof itself in the picture or by sliding the blue control to the desired setting. As the roof opens the picture updates showing the progress. Everyone always thinks its cool to be able to drag your finger and watch the progress while the mechanics are also going.

The sunroof is a great feature and has cool show-off value.

There are 4 key positions for the sunroof but you can also open to any setting you want:

Generally you end up using only positions 1-3. 100% open is ok if you’re sunbathing or parked but it makes a lot more noise than the 80% position when you’re driving.

Vent, unlike other cars, doesn’t do a simply angle the roof to lift the rear edge to provide some breathing room but does something more complex with the entire roof to provide the air. The vent setting looks like it would be a lot less susceptible to rain, dust, etc. than other car vent settings.

The vent setting looks like it is a lot less susceptible to rain, dust, etc. than other car vent settings.

In addition to the controls on the big screen you can control the sunroof with the right scroll wheel on your steering wheel. Select the sunroof setting then press to change and and scrolling the direction you want it to move. A second press on the scroll wheel will close or open it without you needing to scroll. So usually you just double tap the scroll wheel if you’re looking for a quick vent or close the vent operation.

If you use the Tesla mobile app you can vent or close the sunroof (but not open it) from the app wherever you are. This is useful if you left it on vent or open and a rain storm is coming in. Its also useful if you’re about to leave work and you want to let some heat out before you get to the car (turn on the A/C remotely too!). Tesla must have thought it a liability to allow you to open the roof remotely from the app so you can’t do that. But if you use Visible Tesla you can open or close the sunroof to any setting you want from your computer.

You can vent or close the sunroof remotely

The wind noise when the sunroof is in the various positions is what i’d expect based on my experience with other cars. This is impressive since the panoramic sunroof, even at 80% open, is much larger than most sunroofs. The 100% open position is the oddity since its much noisier and I don’t use that setting. 80% is like a normal sunroof being open. Opening the sunroof adds noise, but that is to be expected.

Sound is impressively quiet with the panoramic sunroof, even at 80% open. 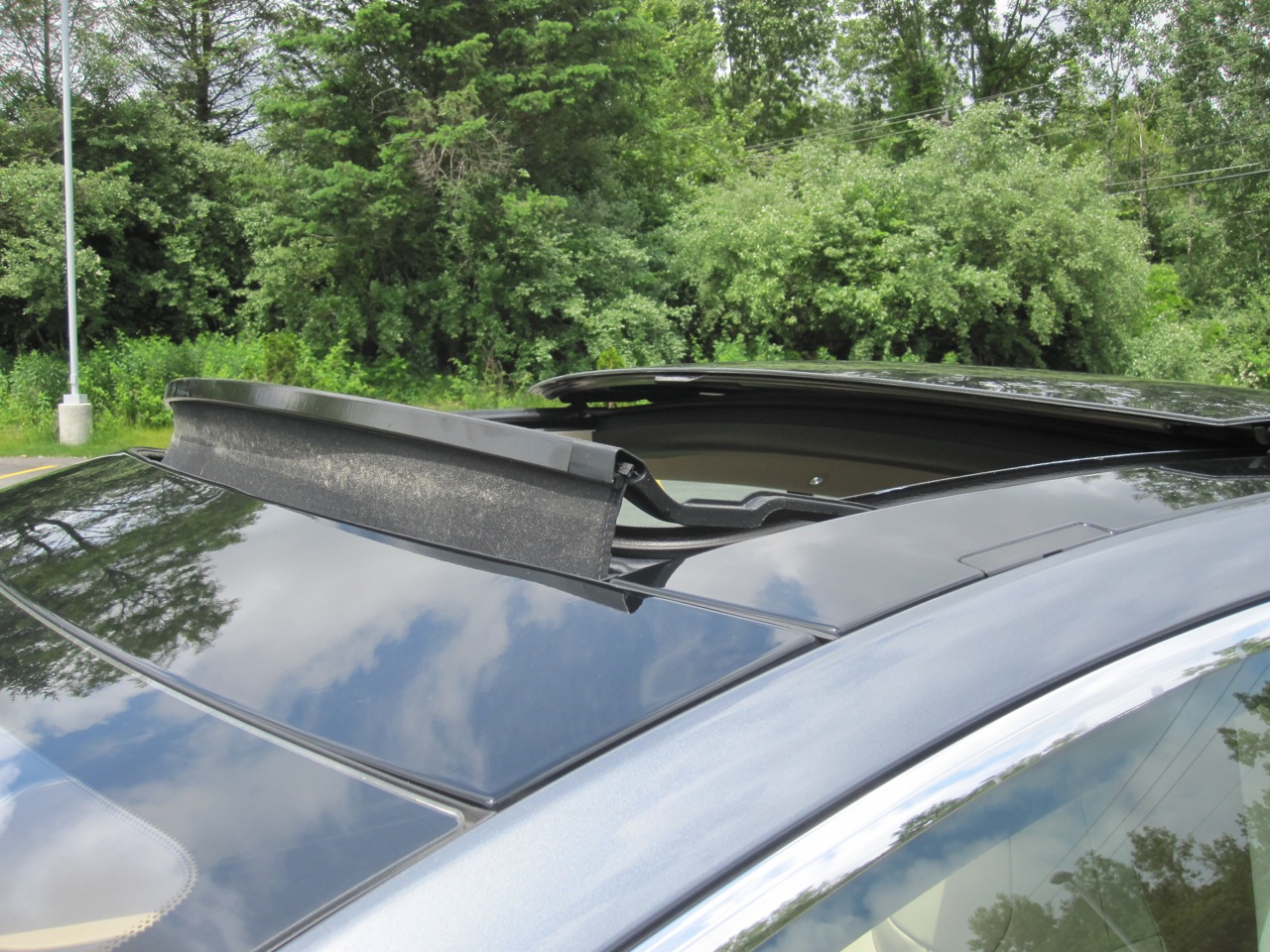 When the roof is open (not tilted) a sound baffle pops up to help with the buffeting noise you can get with open sunroofs. This baffle is larger than you see on most cars (to account for the large open area). I have 2 complaints with this sound baffle:

It has to be large for the size of the sunroof. It has to be fabric because its large. But the combination doesn’t work well for looks or maintenance.

Another thing that i’ve noticed on my Model S is that when the sunroof is open (vent or 80%) and i’m on back roads it rattles a bit more than i’d expect. Since thats basically the only time I would open the sunroof I think thats odd. I’m assuming something just needs to be adjusted/tightened and next time I take it to Tesla for some reason i’ll have them check that out.

One thing many Model S buyers are not aware of is that the sunroof actually provides some functionality thats pretty unrelated to the sunroof. While it may seem odd, you can’t put a bike rack like the Whispbar on top of the Model S without the sunroof. The reason for this is that without the sunroof the roof of the Model S is seamless both inside and out and that leaves no grooves, edges or other locations for third party products to latch on to. This is both true of the outside and the inside so any aftermarket solutions like coat hangers won’t be possible either unless you have the sunroof.

Aftermarket additions to the Model S are more limited without the sunroof.

As I said at the start, the sunroof was a no brainer for me, but if you’re on the fence, or even if you usually hate sunroofs on cars, you should take a second look at the Model S Panoramic sunroof in person. It is not your normal sunroof and can potentially provide unexpected benefits in the future. This is a feature you should not quickly dismiss when ordering your Model S and, unlike other features, there’s no chance they can retrofit this one after you take delivery.

This is a feature you should not quickly dismiss when ordering your Model S.