Like many pure electric vehicles, the Tesla Model S is missing a whole lot of extraneous stuff including gears, transmission and a clutch. This means there’s a whole lot of things that don’t have to be maintained, that can fail, etc. But it also means the Model S drives differently than a normal car.

the Tesla Model S is missing a whole lot of extraneous stuff including gears, transmission and a clutch

Driving the Model S is eerily similar to driving a manual transmission car in some regards.

With the Model S when you’re stopping at a light you use regenerative braking to slow down (like downshifting in a standard transmission car), then at the final point you apply the brake. When you let off the brake its like letting off the clutch — the car is free to roll forwards or backwards. Tesla added the “hill start assist” feature in the 5.9 software update, but that only holds you for 1 second and really only works with decent inclines. In the Model S you will find yourself rolling backwards or forwards a bit after stops on most hills.

In the Model S you will find yourself rolling backwards or forwards a bit after stops on most hills.

In the beginning you will move really quickly from the brake to the accelerator with the feeling of an impending stall. The quietness of the car seems to lend to this feeling too. Later on you’ll be a little more casual about it knowing the Tesla can’t stall. But you still need to be concerned about rolling back into the person behind you if you’re not careful and it can take some time to get used to. 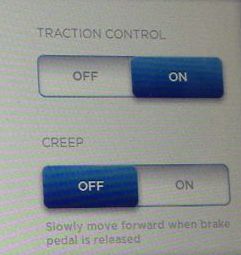 I took my Model S to an empty parking lot and gave the creep feature a try. You can only change the setting when you’re in park. After turning on the setting, put it in “drive” and take your foot off the brake but don’t step on the accelerator and you will start to creep forward. It starts off pretty slow but picks up speed quickly. I measured a top speed of 5 MPH which is pretty quick for creep. You can literally drive around a parking lot in this mode without stepping on either the brake or accelerator and just creep along.

I found that the speed it gets up to is too fast for me. If you’re backing into a space or just don’t want to feel like you’re rolling backwards at a light you don’t need 5 MPH. 1-2 MPH would have been sufficient.

Creep picks up speed quickly and is too fast.

I also didn’t like the idea of the car using energy unless I was specifically “asking” for it to by using the accelerator pedal. I know automatics do this, but this is the new age and there’s no need to waste that energy. I had thought before I bought the car that i’d need it for parking in tight spaces like my garage but the Model S’s accelerator pedal is very well tuned for both fine and aggressive movements. So the only time i’ve used creep was just to check it out and have quickly written it off as a useful feature.

The Model S drives somewhat like a manual transmission car at times minus the gears, clutch and other things. You can tweak the settings to get it to behave more like an automatic but the experience leaves a little to be desired — why mimic the past? After experimenting both with lower regenerative braking and creep i’m really happy with the “standard” modes of creep off and standard regenerative braking. Tesla has done a fantastic job in fine tuning the driving experience to give you the best of both the transmission worlds to make for enjoyable driving under all conditions.